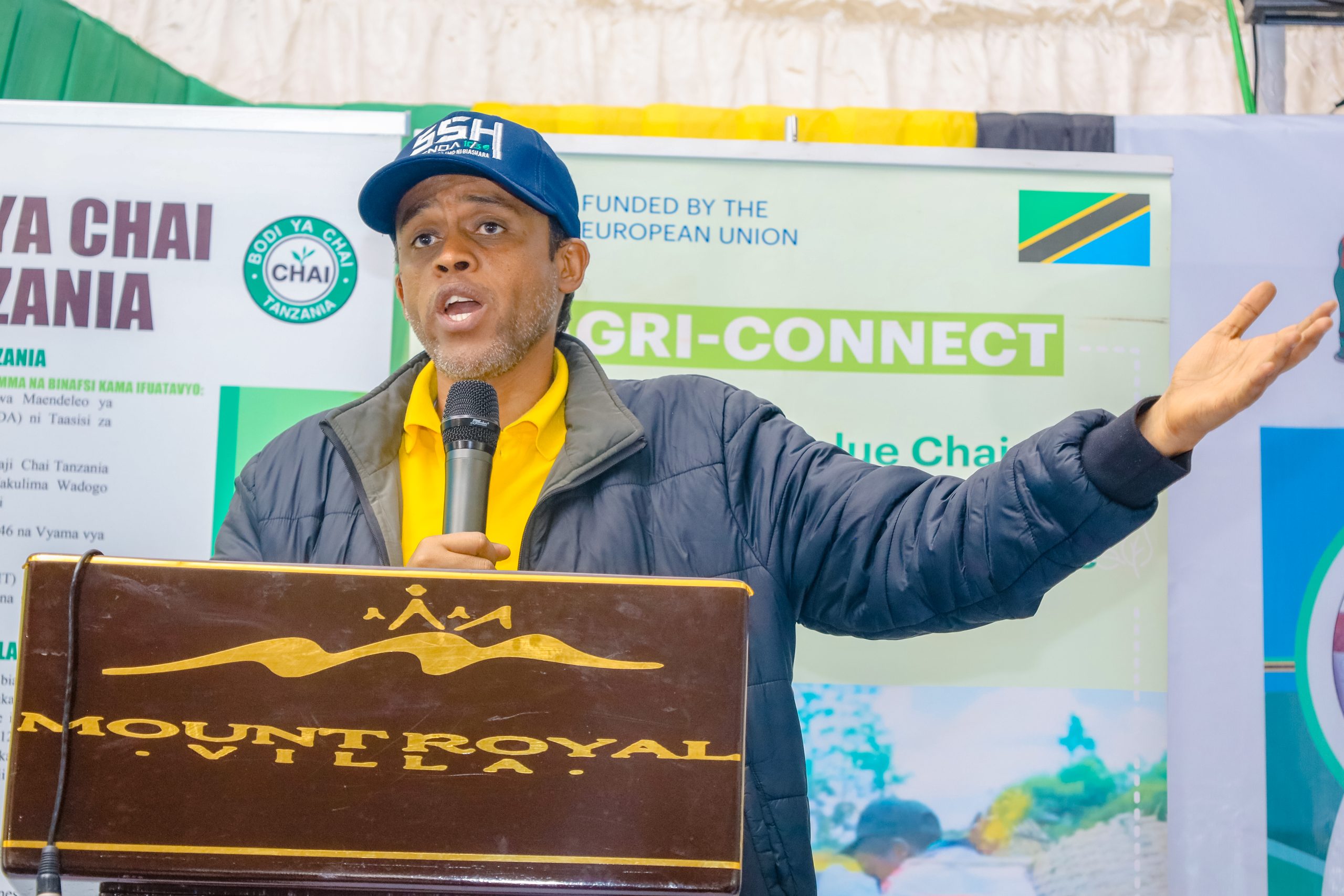 The Minister of Agriculture, Hon. Hussein Bashe has said that tea auction must start early this year to increase the value of the tea crop as well as raise the economy of farmers.

Speaking at the National Tea Stakeholders Annual Meeting, supported by the European Union under the AGRI-CONNECT programme. Hon. Bashe issued the order on January 18th, 2023 at the Royal Palm Hall, in Iringa, stressing that it must come to a stage where farmers can benefit from the cultivation of the tea crop.

He said that it is sad to see that farmers are not benefiting from the cultivation of the tea while there are some of them who spill tea for not being able to sell it and those who sell it but stay for up to five months without being paid.

At the beginning of his speech began by greeting “Chai Oyee”, when he was answered by “Oyee”, he refused, saying that it is necessary to answer “Hoii” (not pleasing) because that is the truth.

“These auctions will not cost any trader, there will be no fees and if you are afraid that we will abandon ‘direct market’, I assure that it will also be there. He added that there must be transparency and we should take steps ahead from this stage where we are,” said Minister Bashe.

He asked what if the farmers decide to cut all the tea in their fields because it is not paying them well and plant other crops? what will happen?

“The farmer takes tea to the factory and gets paid after four or five months, we know that tea has gone through a difficult period and the government is dealing with the bad debts,” said Bashe.

The meeting also agreed on the average minimum price of a green tea leaf of Tsh 366/= per kg from Tsh 314/= which has been in place for the past five years.

In addition to the establishment of the auctions, he has suggested changing the laws that will make MPs who are representatives of the people legal representatives at the meetings of tea stakeholders.

“Tell us the truth, I will not be ready to lead this sector in this situation, let’s get out of here, we have agreed so that the farmers can see that they have been listened to,” said Bashe.

Hon. Bashe also commended on the efforts to revive 3300 hectares of tea farms that were abandoned for nearly 30 years in Kilolo District, Iringa region. Thanks to AGRICONNECT programme initiatives under the support of the European Union.

On their part, some tea stakeholders, including the leaders of the cooperatives, have said that the business of the product was dumb and that Bashe’s instructions have come at the right time.

The chairman of the Kilolo Tea Cooperative Association, Vicent Gaifalo said the issue of auctions on the crop is important and if this is done the tea crop will liberate the farmers economically.

On his part, the Chairman of the Muvyulu Institute which unites nine associations of tea farmers, Wilfred Swale has said that the business was dumb, so the auctions will increase the enthusiasm of the tea farmers.

Chairperson of the Tea Stakeholders Meeting who has finished her term, Anna Makinda said that there must be transparency and truth in the tea sector.

She said that the problems of the tea sector are due to selfishness of the stakeholders and that the crop has been disrupted.

“Kilolo has been an issue for many days but it was not given the weight it deserved; the farmer would want a good price while the factories wanted to pay a low price to the farmers. We see this problem,” said Makinda

Closing his speech before the stakeholders, Hon. Bashe thanked the European Union through AGRI-CONNECT programme for its support in the tea sector. He also made it clear that the government of Tanzania is committed to reviving the whole tea sector to improve smallholder tea farmers’ livelihoods and increase the sector’s contribution to GDP.